Esther and God’s Favour on Women

“Now when the turn came for Esther the daughter of Abihail the uncle of Mordecai, who had taken her as his daughter, to go in to the king, she requested nothing but what Hegai the king’s eunuch, the custodian of the women, advised. And Esther obtained favour in the sight of all who saw her.” (Esther 2:15)

The life-story of a young, orphaned, Jewish woman called Esther written and documented as part of the Old Testament contains every ingredient of a modern-day best-selling novel – drama, romance, intrigue and a fight for power and justice!  But this is more than a gripping holiday read – it is the true story of the profound collision of God’s sovereignty and providence, and the free act and gift of human will.

When King Xerxes was looking for a new Queen, the most beautiful women in all of Persia were brought into the palace. They were adorned with whatever luxuries they desired and were required to complete twelve months of daily beauty treatments, before gaining audience in front of the king.

But Esther was different.  She requested nothing but what Hegai, the king’s eunuch, the custodian of women, advised.  And as it is written “Esther obtained favour in the sight of all who saw her” (Esther 2:15) and “she won his favour and approval more than any of the other virgins; so he set a royal crown on her head and made her queen” (Esther 2:17).

Do you know that when you know that you are highly favoured, greatly blessed and loved beyond measure, you no longer need to depend on your own strength and abilities?

Unlike the other women, Esther wisely and humbly submitted to Hegai’s lead as somebody who would know the king’s preferences best.

This story shows us how Esther depended upon the Lord’s unmerited favour.  She simply rested in the God that deeply loved her, humbled herself before Him and the Lord gave her grace and favour, promoting her and exalting her far above all the other women.

When we choose to do the same, we will also stand out in a crowd (Esther means “star” in Persian) and she certainly shone brightly for God that day.

But the story doesn’t end there.  Because of this promotion to become Queen of Persia she was later in a highly favoured position to protect all the Jewish people from being assassinated.  Esther was able to move in positions of power and influence because of the favour which had been granted over her life.

In God’s kingdom there are no co-incidences.  The Lord wants to bless you to be a blessing and God-incidents are the portal for this outpouring of His love.

Finally, Esther’s Hebrew name is Hadassah which means Myrtle.  Myrtle is a symbol of God’s promise to cause His people to flourish.

In the beginning, God desired for humanity to come together in a loving relationship with each other and with Him in order that they may flourish. God created mankind with this truth inscribed into the human body, as male and female, and He ordered the universe in such a way as to be a place for the covenant between humanity and God to be lived.  But our sin distorted this idyllic picture: there was shame and there was blame.

My prayer is that this beautiful covenant would one day be re-established like it was in the Garden of Eden and humankind would flourish as one, once more.

So like Esther, may you all know that you are highly favoured, greatly blessed and loved beyond measure.  Take up that position of rest, trust in Him and may you depend entirely upon the Lord’s unmerited favour over your life. 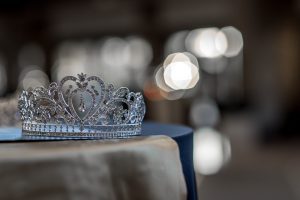