We are thrilled to have launched our new campaign Break the Silence to empower and educate men to take a stand on the issue of violence against women and girls (VAWG).

Over the past several years, it has become evident to us that men hear about the issue of VAWG but do not know what to do to help. It can be seen as a women’s issue, and some men feel there is nothing they can do. As such we have launched a men’s campaign in collaboration with Reels in Motion, Social and Morgan James.

When: The campaign launched today on Monday 22nd November in the lead up to the UN Women International 16 Days of Activism Against Gender-Based Violence on 25th November 2021.

How: In the lead up to the 16 Days of Activism Against Gender-Based Violence the three videos will be released. Two of the videos depict an incident of abuse based on the real-life experiences of survivors. In each video, a male bystander intervenes in the situation to help the victim when a friend is abusive. A third scenario highlights how people often keep quiet as “they don’t want to get involved” or see it as “not my problem”. All the videos carry the underlying message that now is the time to “Break the Silence. The three scenarios depicted are set on a bus, at a sports bar, and in an office.

These will be complemented through links with partner organisations, and by a unique new course (Intervention Training) developed with the University of Exeter and endorsed by Public Health England.

Each video will be promoted across social media and will signpost viewers to Press Red’s website where men will be able to access several different resources. www.pressred.org

Breaking the Silence starts with you. Join us in taking a stand! 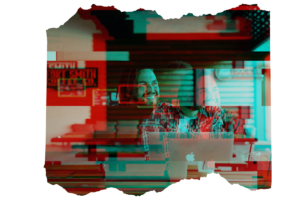