Choose To Challenge Domestic Violence Around The World

Since time immemorial, women have been at the receiving end of violence, particularly sexual and intimate violence. Whether it’s the rape and abandonment of Tamar by her brother more than 2000 years ago or the brutal rape and murder of a young woman in an Indian city more than 2000 years later, or the surge in domestic abuse during the UK lockdown, society has seen women as disposable.

Domestic violence has continued to persist in every society, including here in the UK. British journalist Victoria Derbyshire reported rising domestic abuse incidents in the North West of England in August of 2020 and spoke about her personal story and experience of domestic abuse.

BBC Radio 4 Woman’s Hour reported on the rising cases of domestic abuse and deaths in the UK throughout lockdown. Aljazeera’s The Stream discussed the increasing cases of domestic violence due to couples having to stay in their homes together in countries ranging from South Africa and the USA. For this particular show, due to the disturbing nature of the violence, a question was raised about behaviours women are carrying out for men to abuse them, which caused me concern to think that the woman could be at fault for being abused by their husbands or boyfriends.

Another show that has highlighted domestic abuse by family members is ‘Murdered by my Father.’ This particular show highlights the focus on honour and possession of a woman’s body by the men in a South Asian Muslim community. Thankfully, steps are being taken here and worldwide to alleviate the suffering of women experiencing domestic abuse as victims.

The Domestic Abuse Bill in the UK was amended several times during COVID 19 last year to enable more freedom for British women and any children suffering from domestic abuse. The only problem with the current domestic bill is that it excludes migrant women fleeing domestic abuse from accessing all the support they need, even though they need just as much support as British women.

Significant steps are being taken in other countries to combat domestic and sexual violence against women and children. On the Aljazeera Radio show The Take, journalist Malika Bilal highlighted a new project entitled “The Husband School.” Men and specifically husbands are taught ways to evaluate and transform how they see and treat women.

Right now, new projects and charities are being birthed to provide refuge for women fleeing domestic violence, including women experiencing very dire situations. One particular initiative and one I hope to be part of working as a refuge support worker very soon is Beauty for Ashes Refuges, a new Christian charity. Beauty for Ashes Refuges aims to provide a safe space for migrant women fleeing domestic abuse, many of whom are Muslim.

As one of our Heavenly Father’s prophets prophesied all those years ago – and the prophecy is coming to life – our Heavenly Father is “doing a new thing!”. He is “making a way in the wilderness and streams in the wasteland.” He is doing and going to do so many more new things for these women who seek refuge from domestic violence.

God will create so many ways in the wildernesses of all the precious women fleeing domestic abuse.

God hears, God sees, and He will save these precious women. 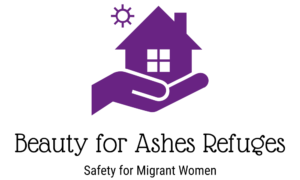