#ChooseToChallenge: Standing Up To Call Out Sexism

Just before COVID, I bumped into a man that I had gone to school with. Not someone I knew well at all but had had enough interactions with to feel rude not saying hello. He looked a little nervous to see me, but I ignored it and went on with the small talk and catching up on the past few years. After a while, he got visibly more comfortable and let me in on what had made him so nervous.

“I remembered our last interaction,” he said. “I want you to know that I’ve changed.’

When he said this, my mind cast back to an incident in the school library quite a few years ago, where he had been listening to a song by a male artist with incredibly misogynistic, violent, and abusive lyrics. Not one to shy away from a heated discussion as a teenager, I remember shouting at this poor boy, explaining what was wrong with what the song was saying about women and how to treat them, and the impact of these kinds of lyrics. Had I made such an impression at this moment that this man, so many years later, felt embarrassed by his actions? He seemed so eager for me to know that he had come a long way since then. We laughed about it and went our separate ways, but it stuck in my mind.

I remember a similar incident from a similar age, at a music festival walking past a big group of men, a good ten years older than me. I heard one of them very casually make a rape joke, and without thinking, turned around and shouted in their general direction, ‘Rape jokes aren’t funny!’. I froze for a second, realising that this might not be very well received from a small 17-year-old girl, until one of them turned to the offender, saying, ‘She’s right, you know. A simple statement, but his backing me up made me feel safer and validated my words within the group. I wonder if that small challenge made the first man and the others in the group think about why that kind of joke wasn’t funny, or maybe it made them feel a little before making another one in the future.

The International Women’s Day 2021 campaign theme is ‘choose to challenge,’ which is a large part of what we do as Press Red. Challenging injustice, violence, misogyny against women and girls is at the core of our work. This International Women’s Day, I’m going to suggest that we recommit ourselves to challenging injustice where we see it, even in every-day situations. With heavier topics such as FGM, it can feel comfortable to take an open stand against it as it feels so wrong and so far removed from us. However, what about when we see our male co-worker telling inappropriate or disrespectful stories about women he’s dated? Or when our grandparents ask us when we’re finally going to settle down or have kids? Making significant changes starts with us, with our behaviours, and in our relationships.

As reasonably successful as these teenage interactions were, I’ve since learned that in most circumstances, there are much better and more impactful ways to call out casual misogyny in every-day settings, such as professional settings and with family and friends.

To help us with our commitment to choosing to challenge this International Women’s Day and this coming year, I will share some of my favourite ways to do this as I know that it can be a scary and intimidating thing to do. While I’ve come a long way since shouting at the boys I went to school with, this is by no means an exhaustive list, just things that I find helpful, and you might too.

It is challenging in professional spaces where we may have something to lose if we stand up or speak to friends or family members about how their behaviour could be damaging. I especially want to challenge men this year to be calling out to their friends on the language they use and jokes they make, as this is not just a women’s issue and men are likely to listen to men that they trust.

When people make sexist jokes, I like to ask why that joke is funny or ask the person to explain the joke to you. There is no way for them to do this without being overtly sexist, and while this can be uncomfortable to do, making the person think about what they’re saying can be a good thing. This can be a good thing to do when you’re around people you don’t know, or in a workplace setting when you don’t know the people you are talking to but aren’t comfortable with said.

Having real discussions, for example, with a close male friend, is something that I also find helpful. Often the misogynistic language is so ingrained in our vocabulary that we don’t realise that we’re using it or how harmful it is. Just by merely pointing it out and having a real conversation about why that kind of language reinforces dangerous ideas about women within society can be productive.
Remember that not every battle is worth fighting. If you are a woman, some men are so stuck in their misogynistic ways that you aren’t going to change their minds.

It’s ok to walk away from a conversation if you’re not comfortable and don’t feel like it will be productive. It’s not your responsibility to singlehandedly change the beliefs and attitudes of the people around you.

This International Women’s Day, let’s recommit ourselves to that shared vision of ending violence against women and girls.

Shifting culture starts with us. 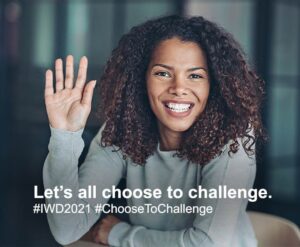