I have never questioned it before. I have always accepted that when I get behind the wheel of the car, I will have to pull the seat forward, sometimes as far as it will go, to reach the pedals. I’ve never questioned why, if I adjust the steering wheel to a comfortable height, do my knees bash against the steering column (and the rim of the wheel obscures the dashboard). Sigh, put the steering wheel back up, raise my arms, learn to live with the shoulder and neck pain.

I’ve never questioned why I have to push my arm back against the side of the seat when I reach to change gear or why the seat belt cuts across my throat–if I had an accident, I’d probably be strangled to death. Why does the top of the back seat obscure my rear vision, making reversing in car parks the most dangerous part of driving? It must be my fault for not being tall enough.

In one car (a small city car), the accelerator was at such an angle that my ankle – average female size 39 foot – had to be braced at such a painful angle that I even tried putting a brick on the floor to rest my heel on. Probably wasn’t such a good idea, road safety, and all that stuff.

I once lived in a flat where the kitchen was so small the fridge had to go in the dining room, and the only place to chop veggies was on the draining board. A kitchen designed by someone who was used to having food served to him and not have to prepare it himself (I deliberately use the male pronoun).

Now, I don’t want to sound like I’m just picking a fight. But these things have consequences. My eyes were opened to the implications when, just before lockdown, my attention was caught by a bookshop widow featuring Invisible Women by Caroline Criado Perez. The best lockdown read ever! Perez follows the consequences for women of living in a world that is designed for men.

It should seem obvious to anyone that women’s and men’s bodies are different. Then why are they treated the same? According to Perez, this bias goes back to ancient Greece, where the female body was seen as a “mutilated male body.” Consequently, doctors treated the “normal” (i.e., male), not the aberration (i.e., female). You would think we would know better by now, but, for example, most research on cardiovascular disease has been conducted on men. As is now coming to light, cardiovascular disease in women presents very differently.

Women represent over half of all people living with HIV. Still, a 2016 review of women’s inclusion in HIV research showed that women made up only 19.2% of participants in antiretroviral studies.ii And so it goes on.

The implications go wider than the effects on the individual; they affect communities and nations. When things go wrong–war, disaster, pandemic, all the gender data gaps are multiplied, as are the consequences.

Rape is a weapon of war (because it offends male honour and patriarchy rather than the effect on the women themselves–how ironic is that!). Official figures say that 60,000 women were raped during the Bosnian conflict, 250,000 in the Rwandan genocide, and 60,000 during the civil war in Liberia. But, because there is often no one for the women to report to, the numbers are probably far higher.iv Female pain is unacknowledged.

It seems as if something as counter-intuitive as proactively, including women in decision-making is not a priority in a crisis. After all, it’s A CRISIS–let’s get on with finding solutions! I propose that it would be better to find good, sustainable solutions. There are many ridiculous consequences of not doing this; after an earthquake in Gujarat, houses were rebuilt, but no one thought to put a kitchen in or an area for livestock (both women’s work). Unbelievably in Sri Lanka, four years later (post-tsunami), the same mistake was made again–kitchen-less houses.

Women were not adequately included in decision making post-hurricane Katrina in the USA. This led to the permanent displacement of thousands of individuals, low-income, and the majority-black women.v

I must stop here. This is getting too long. My challenge to you, my action point, is for you to get Perez’s book and read it. I am sure you won’t be able to put it down. 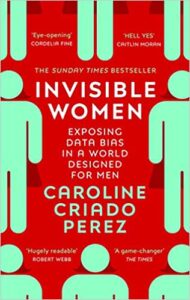