Forced marriage is a marriage in which one or both parties have not expressed their full and free consent to the union.

Forced marriage became a criminal offence in Britain and Northern Ireland in 2014. The British Home Office, in tandem with the Foreign and Commonwealth Office, runs a Forced Marriage Unit to handle such crimes. In 2018, the FMU unearthed 1,764 cases involving at least one unconsenting person being forced to marry. 75% of cases where the gender was known involved women.

The highest percentage of all forced marriage cases related to Pakistan (44%). However, 7% of all cases had no overseas element, demonstrating that forced marriage also takes place on British shores.

We earlier looked at the topic of child marriage. This is just one form of forced marriage. Bullying those with learning disabilities (who are deemed unable to give consent to marriage) into marriage is also illegal.

However, forced marriage does not only involve a dependent. It can take place between adults.

In China, where the infamous one-child policy was introduced in 1979 and only abolished in 2015, forced marriage involving the trafficking of women from nearby countries is rife. Due to legislation which perpetuated the mentality that boys are more valuable to society than girls, many families rid themselves of their daughters. The result is that there are now far more men in Chinese society than there are women – more precisely, 34 million more. In efforts to find a woman to wed, many young men agree to buying a bride. Deborah Meroff writes in her book SOS: Save our Sisters, of how “smuggled brides [are] sold for between $4,500 and $7,500” in China.

The practice of buying and selling women to marry is also common in India, where there is a similar gender imbalance. Some bride trafficking victims note that “You can purchase a bride for as low as 7,000 rupees, and a buffalo 70,000 rupees”. The value of women is hardly held with regard. In most cases, “bought brides” are not given the privilege of legalised, registered marriages. Yet their husbands hold it over their heads that they have been purchased, and claim that this means that they are now “owned”. Due to the low status given them, many victims of bride-selling also become victims of domestic abuse.

The matter of mail-order brides is closely linked. In this curious phenomenon, women advertise themselves alongside a price, online or in print, to draw the attention of a prospective spouse (usually resident in a wealthier country). Studies have found that, far from the match being mutually beneficial, the woman is often subjected to domestic abuse by a man who already had a serious criminal record.

Bride-kidnapping is another frightening subversion of marriage. It is especially prevalent in Kyrgyzstan, where in some areas up to 80% of marriages involved the abduction of the woman. In these cases, women are typically grabbed and shoved into cars by drunk strangers. They are then imprisoned and raped. Once they have lost the virginity, the women are seen as “ruined” and thus are more likely to stay with their kidnappers, even if it means a dismal life lies ahead of them.

Temporary marriages represent another skewed fashion of forging a marital union. Derived from pre-Islamic tradition in Iran, they are also known as “pleasure marriages”. Supported by the Shiite sector of Islam, these marriages can last as little as a few minutes and are religiously approved outlets for sexual relations. Some see them as, effectively, legalised prostitution.

Usually the contract stipulates the amount of money that is to be paid to the wife, and the amount of time that the marriage is meant to last. However, women duped into temporary marriages describe not even knowing that they were not permanent: the only clue is in one little word, mutaa, penned in brackets, and very easy to miss. The BBC reported in October 2019 that many clerics in Iraq advertise young girls as potential temporary brides. Photos are taken and circulated to men desirous of legal sex (extra-marital sex is illegal), who then choose their favourite – who may be as young as twelve.

Men in temporary marriages can leave the contract at any time they choose, and can have as many temporary wives as they wish at once. Conversely, the wife cannot leave at her behest, and must have one spouse at a time, so that parentage can easily be established if she falls pregnant. The contrasts in rights are poles apart.

It is frightening to think of how many women around the world are trapped into marriages. Rather than being their safe haven, matrimony becomes their prison.

We must join with their voices, and avow: ‘I DO NOT’ to all of this 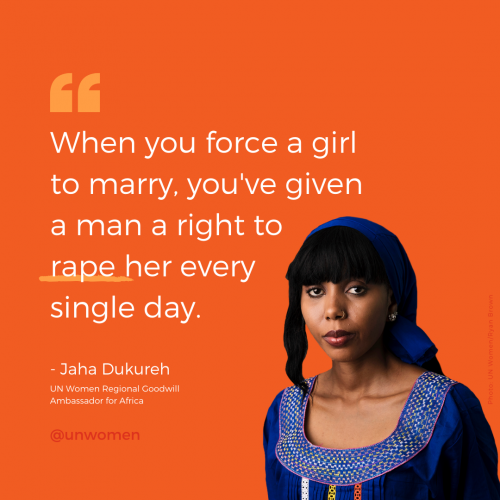